Menu:
Back to Top
Molding History: “Forever Thankful for What They Were Able to Contribute”
Home > Blog

Molding History: “Forever Thankful for What They Were Able to Contribute”

In 1916, I started working at the Die Sinking and Machine Company, a machine shop started by my father, grandfather and uncle. I was joined a year later by my brother Glenn. I learned the steel engraving trade and Glenn learned the machinist trade.

After several years we both left to work for the Mechanical Mold and Machine Company, which had been started by four of my father’s former employees. In 1924, I left their employment to start out on my own in the basement of my home on Storer Ave. My brother Joe, who was still attending high school, started working for me in 1925. In 1926 I moved to a small shop on Yale Street previously occupied by Freitag. My brother Bert joined me and a little later Glenn came to work with me.  We continued operations at this plant until 1932, when we moved to Miller Avenue where we took over the operation of the Wadsworth Core Company which had run into financial difficulty. A number of the Wadsworth employees were put on our payroll and one of them was Jerry Evanitcka. At this time, Ferriot Brothers had about 25 employees, Roy Christenson was also one of them. We continued the manufacture of core machining and repair parts along with core plates and other items used in the foundry trade. At this time, our business was molds and equipment for the rubber industry.

We were the first to make pressed aluminum cavities used in the making of molds for rubber dolls and blown rubber toys of all kinds. Our customers for these molds were all of the doll manufacturers. We built hundreds of molds for the Shirley Temple, Diana Durbin and Didee dolls, and molds for all of the Walt Disney characters. Along with this, we invented and built many machines used in connection with the molding of these parts, and Jerry and Roy were involved in the machining and assembly of these machines during our years at Miller Avenue.

We expanded and prospered even though we were severely hurt during the depression years when all of our working capital was held up for many months by the bank holiday. It was during this period that my brother Bert left us to seek greener pastures on the west coast where he became very successful; he is now retired.

Our lease on the Miller Avenue building, owned by Brown-Graves Lumber, was for 10 years and in 1941 we decided to move to new quarters where there was more room for expansion. We purchased our present building from the City of Akron who had used it for a number of years as the city workhouse. The move meant working in both plants for a number of weeks. As machines were moved, they were converted from overhead line shaft and belt drives to electric motor drives which also meant the installation of bus bar and transformer and switching equipment. We continued in the machining of molds and machining for the rubber industry and added a foundry building which we equipped with gas for crucible melting and later with electric furnaces. We revised the art of making mold cavities using investment cavities progressing from tombasil and nickel bronze to beryllium copper. At one time, we were the largest users of beryllium copper. We developed a line of proprietary items including rotary files, air motors, filters and machinery and rubber presses that were sold under our Power Max label.

During the second world war, all civilian production stopped and we converted to war work, much of which required building the machines used in the production of these new products. We were the largest producers of cartridge dies for small caliber bullets. We machined thousands of tank treads for the Cadillac tank and the amphibious tanks. We made hundreds of oil burners for the Victory and other ships. We machined many parts for the Goodyear Aircraft and other plane manufacturers. I believe we made all of the molds for molding gas masks for the Armed Services, the Navy and a civilian type. We also made molds for the rubber frames for the Polaroid glasses worn by the aviators and many other war related items.

It was during this period that we were hit by a destructive tornado, followed by several days of hard rain storms. We lost most of our roof and had to replace most of the windows. Because of the extreme shortage of labor, it was necessary to make all repairs with our own employees. The resulting clean-up of the plant, machines, work in process, and the rebuilding of the roof and windows, meant many hours of hard work and a herculean effort on the part of everyone. Fortunately, we were able to resume production in a very short time.

After the war we rapidly returned to civilian production, and a gradual change was made from molds for rubber to plastics in the upcoming plastics age. We added a building and started molding plastic by the injection molding process. The first five injection molding machines we built in our own shop which were all of the hydraulic type and Jerry handled most of the the hydraulic work on these machines. We continued the production of molds for toys, and by now they were made almost entirely of plastic. At one time, we had a proprietary line of plastic toys and figurines and several other novelty items.

As our business grew in the plastics field, we gradually disposed of some of our operations such as rotary files, air motors, machinery and presses for the rubber industry and all proprietary items to other companies either thru outright sales or leasing.

In 1952, we hired Chuck Strayer for the drafting department. About this time, the plastic toy molding manufacturing was expanding rapidly, especially those relating to the movies and television. This required the making of hundreds of models and Joe spent many hours both here and at home, and at the same time taught a number of young men the art of model making.

As you all know, Joe was a fine sculptor and a master of all kinds of art. For his contribution to fine arts, he was awarded the world’s highest honors by the Queen of England in an award given to very few men in this country. I am very proud to have started Joe on his artistic career. In our early years, I worked with him in making the models for the dolls and Walt Disney characters. Chuck worked closely with Joe in design work and finding and servicing outside sources of model making.

At this point, I would like to give my brother Glenn recognition for all of the ways in which he contributed to the growth of this company. He contributed a great deal to both the building of molds and machines, and to the expansion of the plant and operation in general. All of you who have worked with him know how of the success and growth of our company he contributed.

Everyone here has been with us 20 years or longer and are familiar with all the changes that have taken place these past 20 years. The changes are continuous in products and in customers and methods. As I wrote this, I was reminded of all the things and events that have transpired during my lifetime. I can remember the real horse and buggy days and the one room school house and how everyone used to run outside to watch one of the new-fangled automobiles go by. It is hard to believe all the changes that have occurred in one lifetime and in the growth of this company over the past 60 years.

Well, enough of the past, what we should all be concerned with now is your future. There will be new markets, new customers, products, methods, machines, talent and growth and it is your opportunity to make it work toward a rewarding and prosperous future for you, your family and your company. This holds true for all of our newer employees also, and it is up to every one of you to help them in every way possible to make a better life for them, their future and their company.

I enjoy being with you and talking to you and hope I can continue for many years. I will be especially interested in seeing what you can accomplish in the future.

In conclusion, I would like to leave you with this one thought. It is very hard to lose old employees and friends. We will miss them, but never forget them, and will be forever thankful for what they were able to contribute to the growth and future of your company. 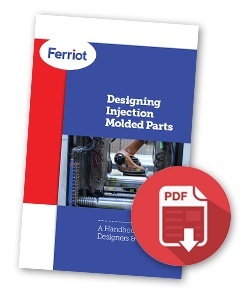 August 21, 2019
In Part 1, we discussed mold flow analysis (MFA) and the ways Ferriot uses it to improve the tool design process and, ultimately, the quality of the final custom injection molding we perform for our customers. In this ...

August 21, 2019
To properly benefit from the advantages of using structural foam parts in your product’s design, first, you need to understand the process.